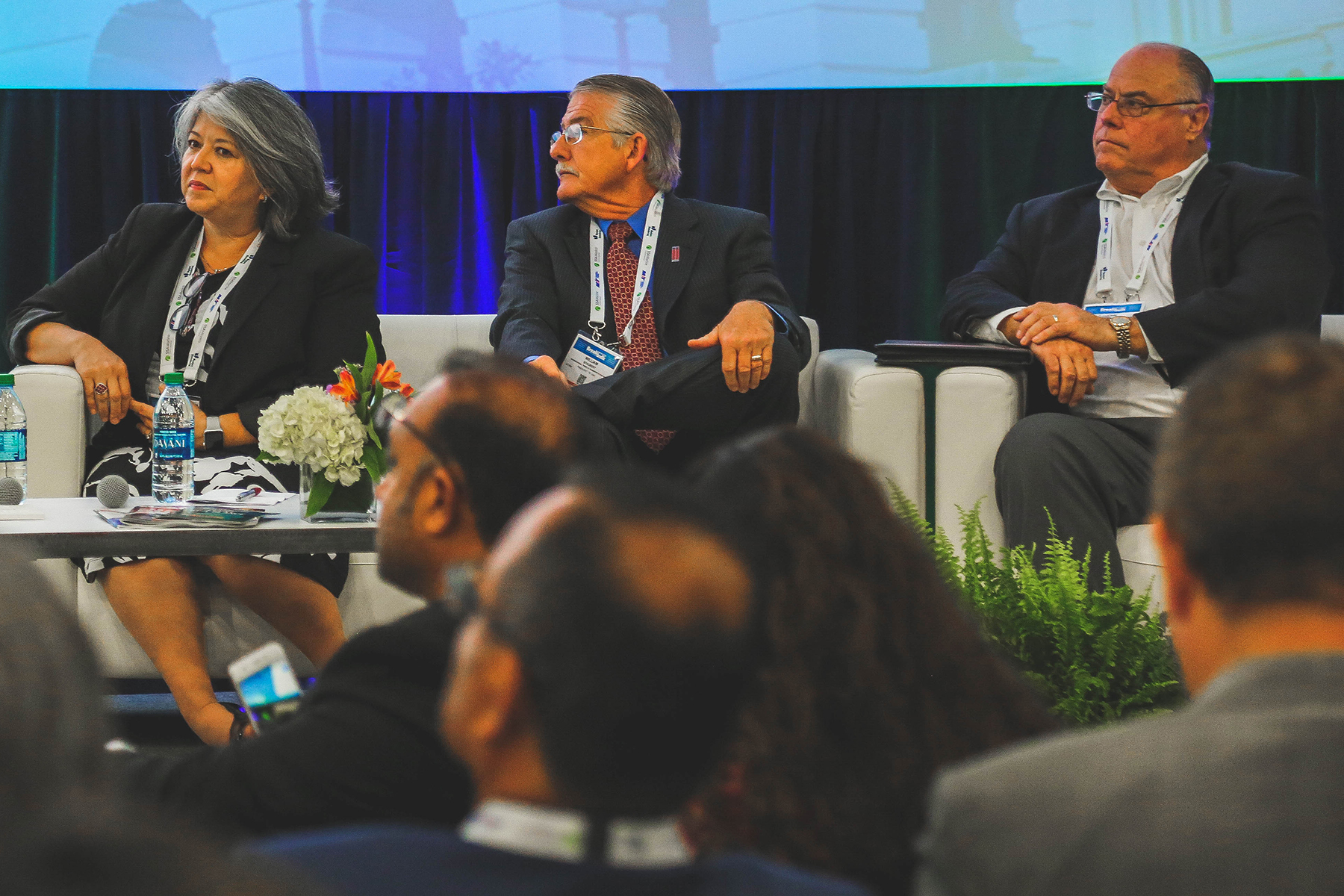 “There are tariff and sanction issues that are not going away anytime soon,” said Kathy Canaan, global compliance director for global EPC Fluor, during a session on trade policy at Breakbulk Americas in Houston.

“What we are going through is unprecedented. The strategies we put in place to do things better, faster and cheaper are being undermined,” Canaan said, speaking of inbound shipments for U.S. petrochemical industry development projects, among others.

In an era when international projects are being increasingly modularized overseas for shipment back to the U.S., complications such as economic sanctions, import tariffs and retaliatory tariffs can wreak havoc with project supply chains.

Canaan referenced Section 232 of the Trade Expansion Act, whereby the president has broad power to adjust imports – including through the use of tariffs – if excessive foreign imports are found to be a threat to U.S. national security. Similarly, Section 301 authorizes the president to take all appropriate action, including retaliation, for “burdens or restrictions” imposed on U.S. commerce.

“It is important to understand the chilling effect of all these activities,” Canaan said, and she challenged Breakbulk Americas’ delegates to discuss the issues, collaborate on solutions, and put together a common platform and voice to take up the argument with Washington. “It’s complicated. It’s a tough environment. There is no value in not sharing … We can weather it a little better if we talk,” she suggested.

John Foster, president of Kurt Orban Partners and chairman of the American Institute for International Steel, said that steel dominates the breakbulk business in the U.S.. He said that when “over-the-top aggressive moves” in Washington restrict steel movements, the maritime industry suffers.

“There are 10 times as many jobs related to steel in maritime in the U.S. than there are in the entire U.S. steel industry,” he said.

Foster said the Trump administration’s “scorched-earth approach” to the steel industry has had “predictable and completely negative consequences.” He said the policies have led to “8 million fewer tons [of steel] crossing our docks.”

He added, “Trade restrictions have a very broad effect on breakbulk, as well as container and ro/ro. The whole national security premise for these tariffs does not hold water.”

Capital Projects not in a Vacuum

Focusing on the export side of capital projects, Capt. Bill Schubert, president of International Trade and Transportation Inc., said that another critical federal issue is the incapacitation, since 2015, of the Export-Import Bank of the U.S. Lacking a board quorum. There are four board members nominated by President Trump – two Democrats and to Republicans, but their appointment is being held up in the Senate by Sen. Pat Toomey, R-Pa., who seeks bank reform. The Ex-Im Bank is unable to vote on capital projects with a value of more than US$10 million. That makes it a non-starter in the project industry.

Schubert, a former U.S. Maritime Administrator, said the Ex-Im Bank is needed because without export capital, there won’t be a capital project. He said 60 percent export credit agency project financing is a common requirement for big projects. “We are the only western country without a functioning export credit agency.” Ex-Im financing for U.S. projects peaked in 2014, at close to US$17 billion.

Schubert conducted a survey of five U.S.-based global engineering, procurement and construction companies and determined that together they had US$68 billion in lost opportunities over a 12-month period due to the lack of U.S. export credit agency financing. There are current projects in the works that also need financing, and there have been lost opportunities related to expansion and follow-on (operating and maintenance) business as well.

He said that the Ex-Im Bank shutdown impacts U.S. presence overseas, encourages the migration of the supply chain outside of the U.S., harms the U.S. strategic industrial manufacturing base and can impact projects of strategic national interest such as those in the nuclear and satellite industries.

“We need to get back up and running as soon as possible, or everybody is going to lose,” Schubert said.