Pockets of Hope, But Subdued Revelry

Drewry’s latest multipurpose and heavy-lift shipping forecaster for the third quarter of 2019 downgraded expectations for dry cargo demand growth over 2019 and 2020, in line with global economic expectations.
Although we still expect to see strengthening rates through 2020, they will be at weaker levels than previously forecast, as slower demand growth eats into demand.

To put this into more detail, let’s look at the supply of vessels carrying breakbulk and project cargo – in particular the multipurpose and project carrier fleet. Our fleet forecast remains a composite of two very different pictures; the multipurpose (no gear and geared) fleet is expected to contract over the next two years, while the project carrier section grows. The combination of the two causes a slight contraction in total vessel supply.

As of Sept. 1, the total multipurpose fleet numbered 3,188 vessels with a combined deadweight of slightly more than 29.5 million deadweight tonnes, or dwt. Within that number there were 912 vessels with heavy-lift capability of more than 100 tonnes, of which 353 had lift greater than 250 tonnes. The two sectors that make up this fleet have some significant differences about age and size. The simple multipurpose vessel fleet has an average dwt of around 9,000 and an average age of 20 years, while heavy-lift capable fleet (project carriers) has an average dwt of about 14,500 dwt and an average age of 12 years.

The current orderbook contains just 53 vessels with a combined deadweight of just below 500,000 dwt, and represents less than 2 percent of the current operating fleet. There is slightly more non-heavy-lift capable tonnage than heavy-lift capable – a reverse of the position just six months ago. It is, however, a very small orderbook due to the lack of any real investment beyond replacement tonnage.

On the other side of the supply equation, demolition levels have been on the decline for some time as 2018 hit an historic low. 2019 is going to struggle to make even those levels. Most of the candidates for demolition are from the simple sector. We do expect levels to rise over the next few years, partly due to the increased environmental regulations. However, we do not see the International Maritime Organization’s sulfur limit in marine fuels regulation having a significant impact as most of the older, smaller fleet already trades short-sea within the emission zones and therefore already burns low-sulfur gas oil.

Taking both parts of the supply equation into account, we end up with a fleet development as shown in Chart 1. All the growth over the next two years is in the heavy-lift sector, while the simple fleet is expected to contract by a similar amount. A total fleet decline at a rate of -0.1 percent to 2021 is expected.

Although forecast growth for dry cargo as a whole and general cargo in particular is steady over our forecast period, it is not a straightforward correlation to multipurpose vessel, or MPV, share. This not only relies on demand for these cargoes, but also on the level of competition from other sectors, such as container carriers, handy bulk carriers and roll-on, roll-off vessels.

Drewry expects total MPV market share to improve over 2019 – albeit slightly – as the markets for the competing sectors continue to improve. In the longer term, we are forecasting MPV demand growth at 1.1 percent on average per year to 2021. Much of this growth is simply due to the increased cargo volumes available; however, there is some movement in the absolute share as well.

But there are some caveats to this forecast due to a number of pressures on the demand side. Firstly, breakbulk and project cargo is not exclusive to multipurpose and heavy-lift vessels, and one of the key drivers for market share is the competition from the other sectors. Our estimates of modal share for MPV vessels with respect to general and bulk cargo dipped slightly in 2018 but are expected to improve somewhat over 2019 and into 2020. 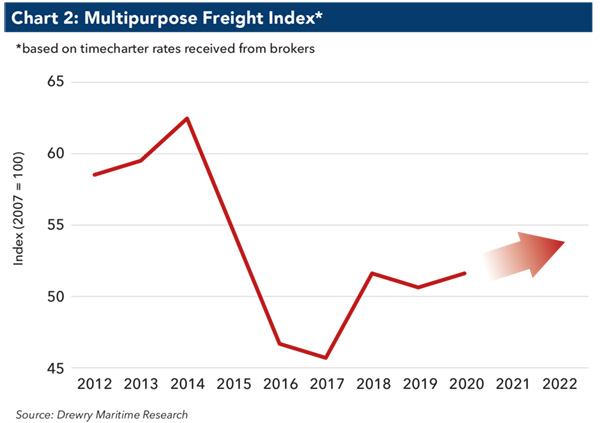 Another pressure on demand is flagging world trade. Global gross domestic product, or GDP, is one of the major drivers for this sector, not only because of the impact it has on investment potential (and therefore project cargo), but also on the confidence levels within the market. The latest forecasts for global GDP over 2019 have been significantly reduced from 3.5 percent in January to 3.2 percent through July, and the expectation is that global output will fall further in the short term.

Add into the mix continued trade tensions and policy uncertainty, and we have further weakening of expectations for growth and adversely affected confidence levels for this sector. In our latest report we forecast both supply and demand for the next five years, and we also try to frame those forecasts with a low and high case scenario. The low case scenario expects a further deterioration in trade tensions, while the high case scenario – which we think will be least probable – has improved international relations and increasing government stimulus. The difference in effective demand in each case is between -0.5 percent and +0.5 percent on the base case.

Drewry’s base case scenario for this sector suggests that there is continued disruption, as the trade war rumbles on, which will continue to weaken the global economy. However, there are some positive drivers for this sector around renewables and specific breakbulk cargoes. Including our assessment of the competing fleets and how cargo will be carried in the future, we expect demand for MPV/heavy-lift tonnage to grow by an average 2 percent per year to end 2021.

Drewry produces a freight market index, as shown, based on time charter reports that we receive from brokers. It takes into account the different ages and sizes of the vessels fixed and has shown some correlation with the supply/demand balance. Out latest forecast suggests market improvement of about 2 percent per year to end 2021.

Susan Oatway is a highly experienced consultant, who has authored Drewry’s Multipurpose and Heavy Lift publications for the past 13 years. She is also co-editor of Drewry’s Reefer Shipping report.