The maritime advisory team of consultant WSP has provided a “top-down analysis” of the wind energy sector, which has faced a surge in development, production and technological progress. WSP's analysis focusing on “hot spots” for growth and general directions of development.

Johan-Paul Verschuure, technical director, maritime, WSP, explained the commodity-based approach to developing global trading. “Breakbulk is a very diverse commodity group which varies greatly depending on the region. Where one region might see a strong focus and surge in offshore wind related cargo and/or oil and gas related cargo, another may benefit from infrastructure investment campaigns, particularly in struggling economies where governments may ramp up infrastructure investments.”

But things can quickly change. Because breakbulk is project and investment related, “it’s much more volatile than conventional consumer goods,” he added. “Continuous monitoring of market opportunities, extended business development efforts and a flexible approach to attract the cargo are essential.”

In addressing WSP’s exploration of wind energy, Verschuure noted the overall outlook for Asia is more promising than in more mature markets.

In general, Europe is generating limited new investment opportunities which has led to a subdued breakbulk sector. However, in terms of wind energy there is definitely more potential, he explained.

Merdan Haydarov, senior consultant, WSP, elaborated: “In the last few years the offshore wind sector in particular has experienced dramatic technological progress. Compared with 2010, units with much bigger capacities are being installed, and the average size of units in offshore wind farms is increasing. These rapid developments are having a great impact on the overall cost of projects globally, which increase the sector’s competitiveness compared with other sources of power.

“This is remarkable as not so long ago cost had been one of the key barriers to the sector’s development. Further technological advances are expected to grow the sector beyond the currently stated government policies,” Haydarov said.

However, many energy analysts believe that wind energy has peaked and potential demand among established markets will begin to taper.

“With the slowdown in economic end demand, we may very well see infrastructure spending by governments pushed up the agenda in the coming years,” Verschuure said. “So to assign an overall score is complex. For example, more investment opportunities are available in South America, but wind energy is still under-developed. Over there, the risk factor of governments and the political situation must be factored into the potential of the sector.

“In general, I see the developing/emerging economies as more of a hotspot for breakbulk than the developed ones. It all depends on how much investment is being made into infrastructure and general industry relative to the current status. This is more the case in Asia than in Europe or the U.S., especially when traditional oil and gas industry related investments taper off in line with the entire energy transition,” he concluded.

• The “Country” and “Hotspots” columns summarize some of the key places where projects are moving.

• “LPI Score” is the average Logistic Performance Index of the countries in the region. Improvements here are generally tied to investments in infrastructure and wider development initiatives which generate breakbulk cargo. A higher increase is typically a good proxy for what is coming up in the next couple of years.

• “Decrease in Country Risk Factor” is the risk profile of the region (averages of the countries) and how that is developing. This is a forward-looking parameter on what is expected through to 2024. An expected decline in risk factor is typically good for foreign direct investment and general investments and therefore for breakbulk moves, while an increase in risk factor typically flags that investments will be put on hold. 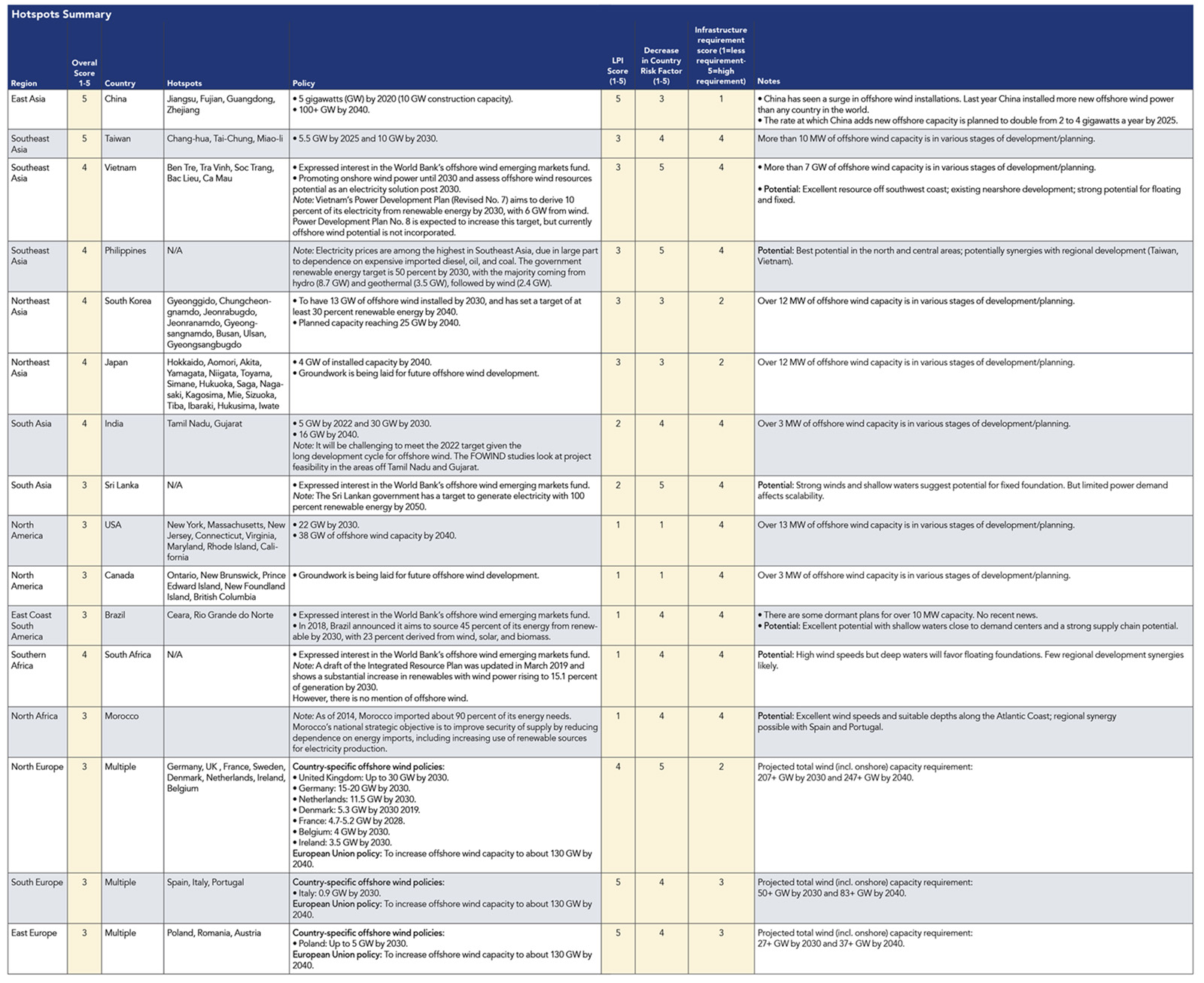