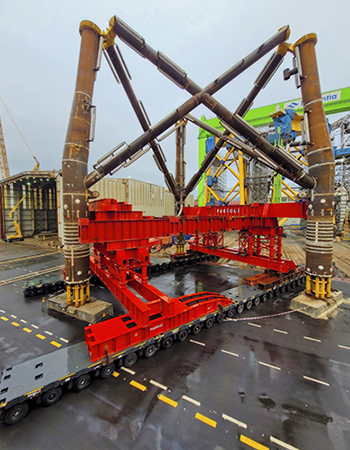 Fagioli, the Italy-based major project and heavy-lift operator, was recently contracted by Navantia to perform transport and load out operations of several jackets in Northern Spain, for a new offshore wind farm to be built in France.

A structure was designed and assembled in order to move the lower and upper parts of the jackets, so that they could be joined together and prepared by the client for the load out operation that will take place in early 2022.

Fagioli employed 56 axle lines of Cometto self-propelled modular transporters with a capacity of 48 tons per axle line. The SPMTs are divided in an open compound with two convoy lanes of 28 axle lines, propelled by two 368 kW power pack units. The total payload capacity of the SPMT configuration was 2,500 tons
Back