Ever Given Finds New Ways to Get Stuck

While the Ever Given was finally freed after getting wedged in the Suez Canal last month, the vessel remains stuck environmentally and financially.

In an event that drew rapt attention globally – and launched thousands of memes and gifs – as well as creating costly snarls within supply chains, the container jam created a spike in ship pollution that was visible from space, the BBC reported Tuesday. 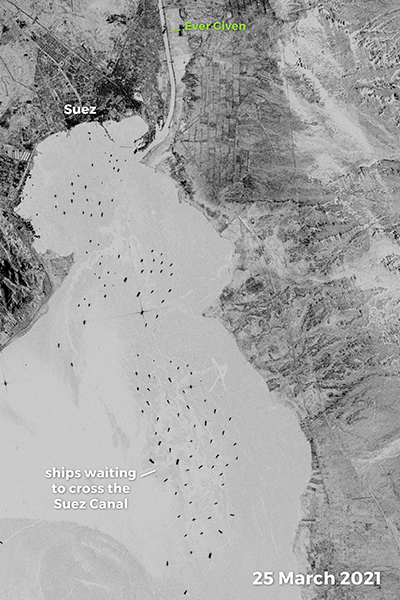 Though the Ever Given was back on its way March 29, the ship and its crew were arrested by Egyptian authorities over a US$916 million claim, multiple sources confirmed Tuesday.

The Suez Canal Authority’s claim against vessel owner Shoei Kisen includes US$300 million salvage bonus and US$300 million for loss of reputation. The ship’s insurer, UK P&I Club, said it has made a counteroffer to settle the claim.

A maritime insurance source quoted by S&P Global Platts said, “the magnitude of the claim is very high and it not fully supported.”

The UK P&I club was seeking a detailed justification for the claim and has pointed out that the ship was floated in less than a week and commercial operations resumed thereafter, the executive said.

Shoei Kisen during negotiations said the claim was too high, given there were no injuries caused and no pollution from when the Ever Given was stranded.

However, it was reported Tuesday that the more than 350 ships held up by the Suez blockage March 23-29 pushed sulfur dioxide up to five times normal levels on the canal’s Mediterranean side of the canal.

The SO2 spike was thought to be generated from ships’s engines burning heavy fuel, as they were anchored at the canal’s northern end in the Mediterranean. While main engines were likely turned off, the vessels still ran under auxiliary power for units and boilers, or in “hoteling” mode.

The buildup of SO2 in the atmosphere over the Med was observed by the European Union’s Sentinel-5P satellite, which is managed by the European Space Agency. The spacecraft is equipped with a sensitive Tropomi spectrometer that can detect a range of pollutants including SO2.

"When the ships are moving, when they're actually cruising, they are emitting more sulfur dioxide than when they're just hoteling. But it's the fact that we have so many ships collected together, all parked, that we get to see this signal in the Sentinel-5P satellite data," Maryam Pourshamsi, an earth observation specialist with Airbus Defence and Space, told the BBC.

About 12 percent of total global trade moves through the Suez, and the traffic jam’s impact was also felt along entry/exit corridors including the straits of Gibraltar, Dardanelles and the Bosporus.

The SO2 spike dissipated once the Ever Given was freed and vessels resumed moving through the canal.

The International Maritime Organization, in its drive to limit gas emissions, introduced a regulation last year requiring ships to use cleaner fuel, with the aim of reducing annual sulfur emissions by more than 70 percent. Later this decade, the Med region is expected to implement even tighter restrictions amid the region’s burgeoning ship activity.

An emission control area would limit sulfur emissions to one-fifth of what’s permitted under the new IMO regulations. The shipping industry also has committed by 2050 to reduce emissions of greenhouse gases 50 percent from 2008 levels.

Sulfur oxides in the air contribute to respiratory, cardiovascular and lung disease, while sulfur in water acidifies rain which damages crops, forests and aquatic species.