Beaming in a Virtual Expert

Key breakbulk industry verticals, across all modes and roles within the massive supply chains, are employing industry-changing, remote expert technology within their operations, making the seemingly impossible possible.

It was an eye-opening discussion during the Breakbulk Americas Digital Special’s second day, Nov. 4, that focused on technology and innovation.

Spoljaric, a key industry innovator from a leading engineering, procurement and construction firm, noted the concept’s first appearance was in 1973, when a NASA engineer coined the terms “telecommuting” or teleworking. By 1991, a transport engineer published the first major research paper on the concept. By 1994-95, companies such as AT&T, American Express and IBM changed policies and began to offer telecommuting, and as a result reduced their office space. In 2010, the U.S. government passed the Telework Enhancement Act, which required federal agencies to formally establish a policy on remote work.

Spoljaric maintained that research has shown that employees are more productive telecommuting – not less – as many companies have enthusiastically confirmed during the business corrections during the pandemic.

“That NASA engineer in 1973 suggested that within 10 years almost everyone would be working remotely. Now we are 40 years later and it took a pandemic to be a catalyst to this change,” Spoljaric said.

Today, across the breakbulk industry, remote expert technology is being employed and enhanced among intermediaries, ocean carriers, truckers, surveyors and insurance providers, as well as for the shipper’s perspective.

“It’s not Star Trek teleporting,” Spoljaric said. “We’re not beaming people from here to there, but we can actually put somebody on the ground at Luojing Terminal in Shanghai and moments later have them at the Port of Baltimore. They can virtually move from port to port quite easily.”

Initially, for the heavy-lift and project cargo sector, the remote expert has been employed “from a safety perspective,” Spoljaric said. “It’s the ability to keep people in safe positions and to go look at things in dangerous situations.”

But leave it to Spoljaric to bring the issue closer to the home … and his Dad’s smartphone.

“Even personally, I can go the grocery store, and connect with my ‘remote experts’ back home to make sure I’m buying the right cereal,” he said.

For the logistics and freight forwarding industry, leading companies such as DHL see this as a natural next step forward in innovation.

“We’re very much focused on innovation and have an entire group working on innovation,” said Jake Swanson, global head, EPC project sector for DGF Industrial Projects and DHL Industrial Projects. “Every year we’re sharing with our customers our trend radar. We look at the key trends and items that are coming forward in the shipping industry.”

Remote expert technology is a brightly blinking blip on that radar. Swanson said in the past year DHL has partnered with a technology platform, an ocean carrier and a shipper, using a video platform to observe operations at sea, observing loading and discharge, and sharing those live video streams to control tower setups, and customers, remotely. Further, DHL is exploring whether the technology would allow approvals and sign-offs.

Those signoffs are key to industries whose inspections and sign-offs are vital for liabilities, customs and legal approvals – those who are dragged to the fore when something goes wrong.

Capt. Andrew Kinsey, senior marine risk consultant, Allianz Risk Consulting, acknowledges the value of keeping people safe, particularly in the pandemic, while being able to ensure safety of the cargo in dangerous environment.

“Remote technology is not a replacement for the surveyor,” Kinsey acknowledged. “It helps fill gaps when we can’t have attendance.”

Kinsey noted success among some rail, vessel and barge channels, and the need to accelerate solutions in the Covid-19 environment. However, “the key for us from an insurance standpoint is, it’s nice to get the picture, but we need to make sure we’re getting the picture of the cargo properly secured, and have a chance to stop it and remediate it.”

“First and foremost, we use (remote expert) to evaluate the securement of our shipments, to make sure our securements are correct,” Leis said.

ATS also uses the technology from a safety perspective, evaluating driver behavior on highways from a dashboard camera, and “using remote expert to coach drivers to improve those driving behaviors,” Leis said.

The most vital application from a shipper perspective is the handling of critical loads that require very specific securement plans, particularly for high-value, uniquely vulnerable loads. ATS provided a video demonstration on the securement process during the webinar, a video feed of a load jet turbine, situated in a cradle on a flat-deck trailer.

Before departing an origin location with a securement verification requirement, the driver must take images and send to remote experts via ATS’s internal driver application. The experts evaluate and ensure the load is properly secured, and respond with required corrections to the driver, or confirm the securements are correct and release the driver to depart, Leis said.

The niche carrier’s drivers encounter a broad range of loads. “Our drivers are not assigned to a specific freight type,” he said, with the exception of drivers qualified and trained on specialty loads – such as jet turbines.

Unique loads also requiring expert oversite include loads with crane booms, wheeled equipment, and pieces that are hinged or have rotating elements.

“On top of everything else,” he said, “we ensure more than one set of eyeballs are evaluating, making sure it arrives at destination damage-free.”

Unlike most companies’ broader push towards such interactive solutions, ATS’s use of remote experts is a cure in response to ills prior to the pandemic; those greatly impacting the trucking industry.

Leis said the trucking industry was facing uncertainly caused by the labor market, securing experienced drivers and retaining them in an employment market that was becoming increasingly transient. Further, due to catastrophic rulings in motor carriers collisions that crippled many companies, ATS needed to ensure not only the employee culture, but their faith and commitment to stick with the niche carrier, who has been on a significant growth arc over the past decade.

“Our system grew out of our understanding of what the driver knew and their experience was out of sync with reality,” he said.

It’s impossible to place “an expert in any truck,” under the circumstance, so ATS’s homegrown system extended training outward to the open road.

As part of its in-house system, ATS does audits of 15 percent of drivers’ securement each day. Drivers are instructed to pull into a “safe haven” and they are evaluated to ensure they’re followed all securement criteria.

“Our customers are requiring higher and higher levels of performance,” Leis said. With unique, high-value loads, “you deal with a guarantee of 100-percent certainty, or people’s lives hang in the balance. It means a costly mistake and possible loss of business.”

For most industry verticals, the lack of face-to-face is insurmountable in some nuanced customer service. Interactive technology has become a valuable surrogate, particularly for global organizations like DHL, which needs to customer face, have visibility at ports, jobsites and loading origins.

“We rely on our network,” Swanson said,” whether it’s project teams or global forwarding teams located locally. We use the video capabilities we have in house” to fill in the gaps.

Allianz’s Kinsey noted that while the current industry environment has sparked accelerating interactive options such as remote experts, the fear is an ad hoc development of multiple platforms, rather than finding a shared platform that enables streamlined and mutually verifiable connection.

“Just because it worked yesterday, doesn’t mean it will work tomorrow,” he said. “We have to be robust in vetting and review, to ensure everyone is on the same page.”

Spoljaric boiled it down to “transport assurance,” through communication and redundancy.

Who Holds the Camera?

Rather than a head-long dash into adoption, there are risks of a company getting ahead of itself in technologies such as remote experts, panelists agreed.

For starters, there are the connectivity issues of wi-fi, or cellphone service in remote places. Proper training is another obstacle, and perhaps more so is the deep-end, sink-or-swim approach to new initiatives.

Connectivity also means ensuring that the customer embraces the process.

Spoljaric noted Bechtel utilizes a “stop card authority. If we bring out the stop card, everyone must stop. It’s a life-critical event.”

However, resistance is often seen in those events. In a face-to-face environment, usually such conflicts may be talked through. However, a disparate voice on a phone or app will force an escalation with a driver, shipper rep, or supplier.

Leis said ATS has developed internal protocols. If there is resistance at the source for proper securement by the driver, despite the remote expert protocol, the issue escalates to the fleet manager. If unresolved, then the response moves up the operations management structure. “Ultimately, it may mean simply pulling a driver off a load that they’re not going to properly secure,” he said, though it happens only infrequently.

The more unique issue is when the shipper refuses to make changes in dunnage or configuration, Leis said. Similarly, the dispute moves through the customer support team and the actual manager of the load tender puts emphasis on the unsafe loading.

“Ultimately our final step is we’re not going to haul this load; we don’t think we can safely do it,” Leis concludes. In extreme cases, the load tenderer maintains he can find other drivers to handle the load, but ATS will still walk away.

DHL’s Swanson also noted there has been resistance to the process, particularly within the port environment. Unionized ports have found resistance from labor in simply holding the camera.
“So we had to hire a surveyor to hold the camera,” he noted, which defeats the whole remote proposition.

Down to brass tacks, Spoljaric asked who pays for all of this technology and development. While the shipper directly benefits – and vendors receive a degree of shield for liability - there’s considerable development, hardware and software investment.

“It always comes down to forwarders, doesn’t it?” Swanson joked when Spoljaric called on him first. However, he pointed out that the cost/benefit weighs toward the service provider that differentiates itself in the industry for its leading-edge approach.

“Where infrastructure is required, port or ship, that’s where (those entities) have to look at investment.”

“Nobody likes the insurance guy to begin with,” Kinsey followed as to who picks up the check. But from his perspective, the situation requires a longer view, instead of worrying about nickels and dimes now. And like Swanson, he notes that such investment makes one a “best-in-class provider.

“You can pass on costs, but everyone has skin in the game,” Kinsey added.

ATS’s Leis emphasized the long-term value of the remote plunge. Investing in customers draws larger customers and more dedicated freight based on trust and reliance. “We’re actually saving money in our operation. I look at it as a win-win. There are some upfront costs, but we’ll see a return on the backside,” he added.

At the conclusion of the webinar, Spoljaric offered a quote from NFL Hall of Fame Coast Vince Lombardi: “We would accomplish many more things if we did not think of them as impossible.”

“It is possible,” Spoljaric concluded. “The people on this panel have given us some perspective.”

Watch the replay of Could Remote Expert Technology Be the Next Big Thing? webinar, part of the Breakbulk Americas: The Digilta Special 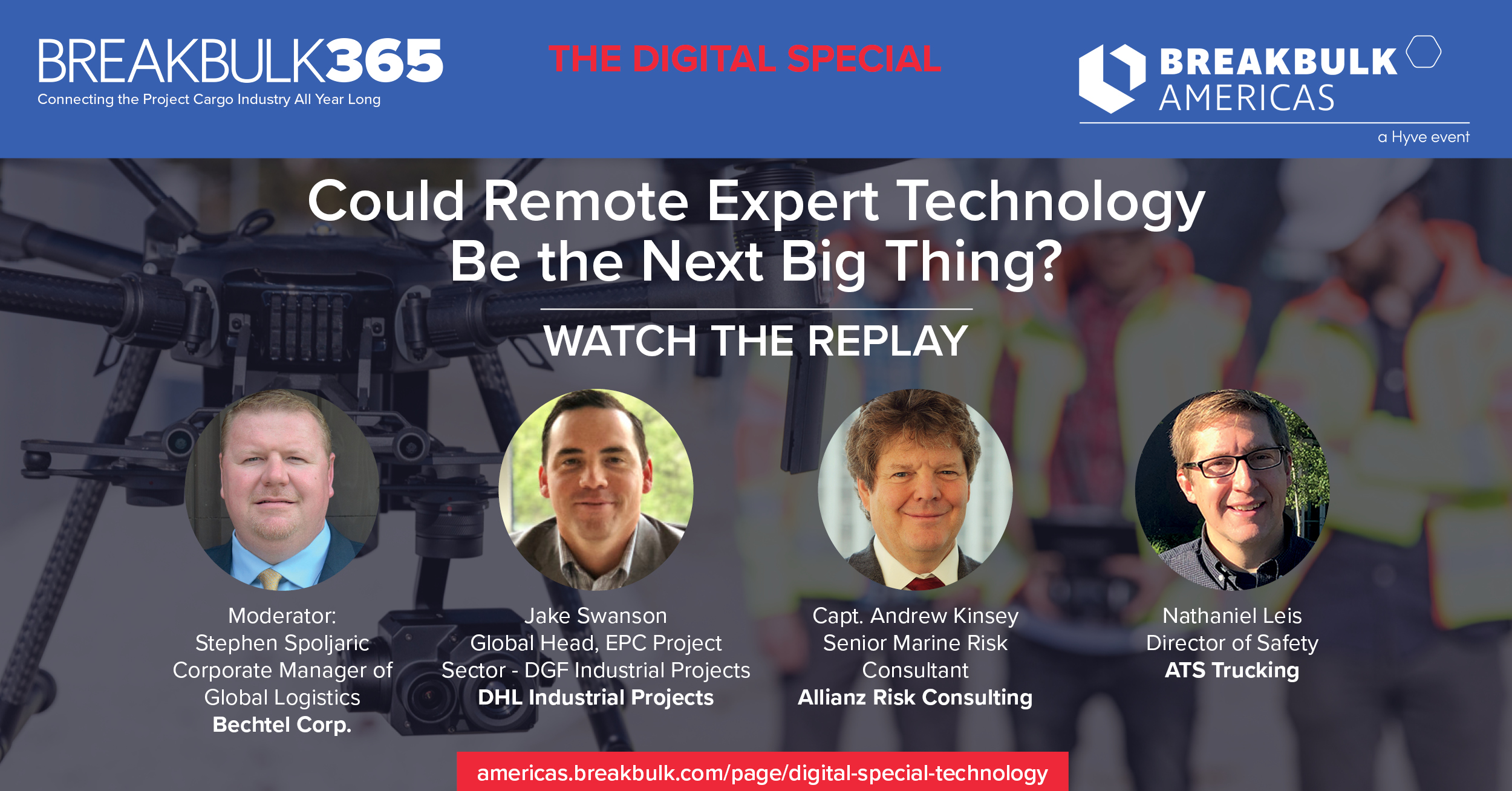